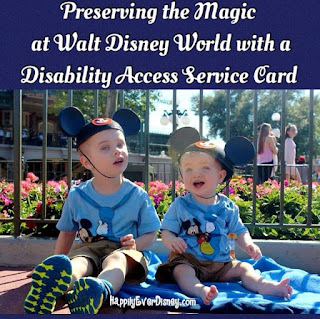 We have our first guest post from mom, Lauren Domitrovits. Lauren's son suffers from a rare genetic disease, ataxia-telangiectasia. As a result, she had been nervous about traveling to Walt Disney World. Traveling with little ones can be daunting on it's own, but add in a physical or emotional limitation, and parents often worry to the point of skipping a family vacation. Lauren recently went on her first family trip to Walt Disney World and was so happy with how truly magical Disney and cast members made it, that she wanted to share her story with other families to inspire them to to put their fears aside and let Disney help you temporarily "forget about your worries and your strife."

In August 2014, our three year old son, Brian was diagnosed with a rare genetic disease, ataxia-telangiectasia.  A-T is a progressive disease that is ultimately terminal.  WHAT IS A-T? Imagine a disease that combines the worst symptoms of muscular dystrophy, cerebral palsy, cystic fibrosis, immune deficiencies, and cancer. Children with A-T are usually confined to wheelchairs by age 10 and often do not survive their teens. Because A-T is a multi-system disease, scientists believe that A-T research will help more prevalent diseases such as Alzheimer’s, Parkinson’s, AIDS, and cancer. - Learn more at: atcp.org
It became the focus of our family to be sure that Brian is able to have meaningful experiences while he is still mobile and able to move independently; while he is carefree.  Obviously, one of our major goals was to get him to Disney World, Florida!  I had some major concerns for Brian’s stamina at the parks.  Right now, he is mobile and independent, but movement is still difficult…mostly exhausting.  Disney is the magical experience of a lifetime for children, and I didn’t want him to miss a second.  I was worried how we could possible drag him through the parks all day and have him be a part of all the excitement.
Luckily, Brian’s godmother, Sarah, is a Disney bride who also happens to be a DVC member.  We had a “family” meeting because remember, friends are the family you choose!  We began planning the trip, the group trip of a lifetime!  Sarah mentioned the Disney Parks Disability Access Service Card (DAS), so I quickly started reading about it.  Success!  This was the key to Brian having a magical trip.  The DAS card can be obtained at Guest Services in Walt Disney World.  It allows people with disabilities to avoid waiting on long lines in the hot sun.  It also allowed our stroller to be marked as a wheelchair.  For Brian, this is what I needed!  The DAS card would provide me with a way to preserve his energy and allow him to utilize that energy on fun and excitement!  The website stated that there has been some widespread abuse of the DAS card, and that statement made me nervous because Brian doesn’t “look disabled.”  Unless you are watching him carefully for signs of A-T, you wouldn’t necessarily see it.  My pediatrician (and ultimate support system) helped ease my nerves by giving me a note on her letterhead that stated, “Brian requires the use of a DAS card.”  Phew!  A few clicks later, our DVC points trip was booked, a double BOB stroller would be delivered to our room from Kingdom Strollers, our DAS card note was packed and we were counting down to April! 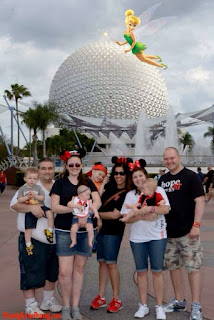 We arrived at Magic Kingdom for our first stop.  Everyone was giddy with excitement and anxious to begin exploring.  We stopped at Guest Services first.  The staff was welcoming, compassionate and kind.  I showed them my note and explained the quick version of our situation and need. (Happily Ever Disney Note: Legally Disney can not request a Dr.'s note, however if you have one, you may offer to present it, and may ease the process.)  Within 10 minutes or less, our stroller had a wheelchair sticker on it, Brian had been photographed for his DAS card (which looked like a passport) and the total number of people in our group was printed on it.  BOOM!  We were off!  The DAS card worked easily and was similar to a FastPass, when Brian wanted to go on a ride that had a long line, for example, It’s a Small World. We brought the DAS card to the attendant at the front of the line and asked for a return time.  The attendant would check that the DAS holder (Brian) was present (the DAS card may NOT be used without the designated recipient, which I think is more than fair), and they would write a return time on our pass.  The return time was never more than 10 minutes.  We would enter through the Fast Pass line, with the stroller and quickly hop on the ride or join the attraction.  We were always greeted by a smiling Disney attendant who would take the stroller and bring it to the ride exit - I literally didn’t have to worry about ANYTHING.  Brian was always smiling and was able to use his energy effectively.
This pass worked just as smoothly at every park we went to: Magic Kingdom, Epcot, and Hollywood Studios.  What I loved most was watching Brian’s smile all day, every day.  Cast members went out of their way to greet him and make him feel special, but they never made him feel different.  Brian experienced every ounce of Disney magic that was available.  He laughed, he played, he smiled, he enjoyed himself, he ran, he jumped, he ate sweets, he shopped, and for those 7 days…our family was A-T free…the joy of that trip carried me for many months, and still does.  There is nothing like watching your child enjoy the sheer magic of Disney.  I can’t wait to go there with him again, and he hasn’t stopped asking to return since he left.


Looking back, I firmly believe that without the DAS card, our trip would have had many bumps and difficulties.  Brian can’t enjoy things when he is fatigued, he becomes consumed by feeling tired, his speech slurs and the drool becomes significant.  We didn’t experience anything but happiness with that card.  What a gift…a magical gift.  So run!  Don’t walk!  Take your child on the trip of a lifetime .and let the DAS pass ease your mind and allow you to enjoy yourselves and leave all your stresses at home. 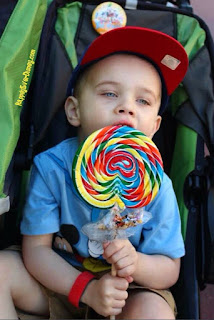 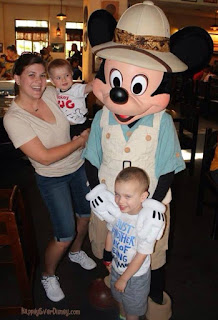 Lauren and her family are excited to have the opportunity to travel back to Disney World this Spring when they will visit Give Kids the World Village. Happily Ever Disney is a proud supporter of GKTW thru partner charity Magical Wishes for Kids who we volunteer with. You can learn more about GKTW and how you can help on our website http://www.mwfk.org/how-you-can-help.html

If you or someone you love has been diagnosed with ataxia-telangiectasia, you may connect with Lauren and others in her facebook group, Hope for Brian.

Make sure you follow us on facebook for even more Disney info, tips, tricks and savings. https://www.facebook.com/happilyeverdisney
Posted by Nicole O at 10:46 AM