New Meet and Greet Area for Anna and Elsa coming to Epcot. 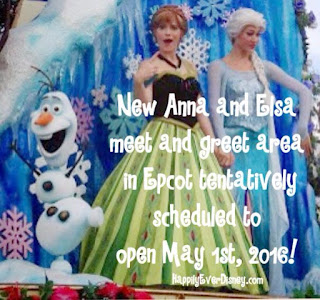 Looks like Disney will finally use the extra space between the Mexico pavilion and Norway pavilion in Epcot to build a brand-new meet and greet area for Anna and Elsa. No confirmations yet, but it is rumored that Olaf may also make appearances in the new character building. The space, just behind the current margarita stand, will be a large area close to an acre in size. I imagine it will be much like Princess Fairytale Hall in Magic Kingdom but with elements that reflect Arendelle from Frozen. This area will be in addition to the new Frozen attraction that will replace the Maelstrom attraction in the Norway pavilion.

While no official dates have been discussed, I expect this to open around the same time as the new Frozen ride projected to be complete in 2016. I will update as information is released.

Although I am sad to see maelstrom go, I'm excited to see Disney using some of the empty spaces around the World Showcase. I also know that there has been criticism for bringing elements of Frozen to Epcot's World Showcase,  however I am happy to see something that may bring more families to Epcot. All too often I hear that families have skipped Epcot because they think there's nothing to do with younger children. This however is completely false. Epcot is one of our favorite parks and my children often ask to go to it multiple days. Perhaps this will encourage others to explore the various things to do around the World Showcase. This will also allow for Princess Fairytale Hall to feature other princesses as originally designed.

Below is a photo of the proposed building site. As you can see it will be a huge expansion. I'm also happy to see that they will be adding more restrooms to the area as well.

So what do you think? Do you like the idea of a dedicated place for Anna and Else? Will this addition encourage your family to visit Epcot and World Showcase? Leave me your comments below.

Make sure you follow us on facebook for even more Disney info, tips, tricks and savings. https://www.facebook.com/happilyeverdisney
Posted by Nicole O at 9:40 AM